This year I didn’t see anything related to Brazilian Carnival. On the other hand, I was fortunate to be in Sri Lanka on a full moon in February to see the Perahera Parade. Some drums, costumes, parade cars and dance steps even reminded me the Brazilian party, though here there wasn’t any celebrities or scantily clad women showcasing their Samba skills. Instead of that, many elephants parading with full brightness outfits!

Despite of all religious diversity in Sri Lanka, a Buddhist holiday is repeated in each and every full moon: the Poya Day. Several shops remain closed – including the banks – and alcohol sales are forbiden since the night before the holliday, which marks a different celebration of Buddhism every full moon day. The greatest Poya happens in February and is called Nawam Maha Perahera – also known as Elephant Parade by the tourists.

This kind of procession is traditionally held in Kandy region, but also became popular in Colombo from late 70s onwards. Tickets for seating at the stands are quickly depleted and people spend hours standing in the nearby sidewalks to Gangaramaya temple to see the elephants. The animal has special meaning in religion: it would have appeared in a dream the day before Buddha’s birth.

In addition to the herd dressed in giant costumes, there’s music, dance, parade cars and impressive Circus performances. The beginning of the parade is marked by some guys whipping the air. There are groups of acrobats, dancers with ribbons and fire rings. Few women and children participate in the show, but most of the performers are men. And, even if many guys are dressed in women’s clothes, there’s no mockery involved – I’m just popping some comparisons with Brazilian Carnival  to associate with something my fellow compatriots are used to see every year.

As much as I was delighted to watch the parade, I couldn’t help feeling a certain apprehension by getting so close to those elephants. Not out of  fear, since they are chained by the feet – which hinders their locomotion. I was just wondering how they were transported and fed, if they’ve had time and shade to rest during the day… And what about the sequins and embroidments? Were the elephants itchy or felt annoyed wearing those fancy costumes? None of these questions seemed to bother the public, since the elephants have an important role on Sri Lankan culture. They told me that Buddhists are devoted to treat these animals well. From the bottom of my heart, I want to believe so… Namaste! 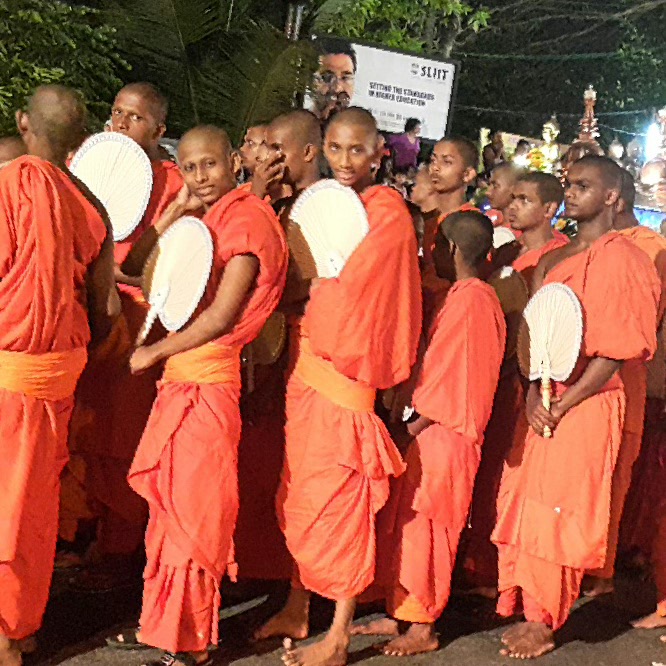